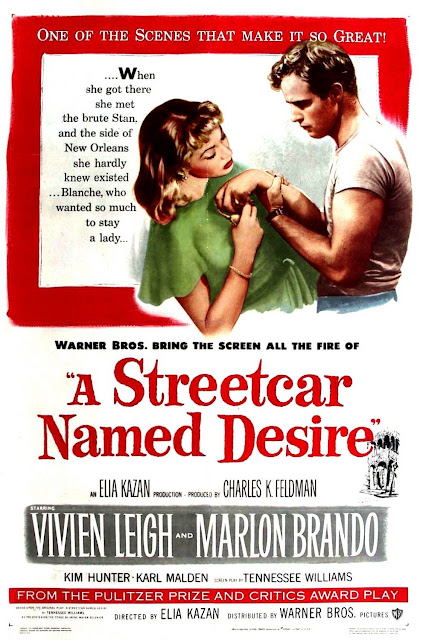 
When Elia Kazan’s film A Streetcar Named Desire opened in September of 1951, those who’d read the play or seen the Broadway production, knew this was something very different. The 1947 drama, for which playwright Tennessee Williams received a Pulitzer Prize, was for the most part intact. The haughty Blanche DuBois (Vivien Leigh) comes to live with her sister Stella (Kim Hunter), and her sister’s earthy husband Stanley Kowalski (Marlon Brando). But the nuances that defined William’s dramatic style were quietly erased. The Production Code Administration, led by Joseph Breen, demanded up front 68 changes (some rather major). Blanche’s dead gay husband is now simply referred to as sensitive; the rape is covered in darkness; Blanche’s sexuality is quieted down. But even this was not enough, as Warner Brothers worked out a 11th hour deal with the Catholic League (unbeknownst to either Kazan or Williams) to cut another four minutes from the film before it was released. But while film censors tried to water down the play’s fiery sexuality, the one thing they couldn’t cut was Marlon Brando himself. In one of his first film roles, the shirtless, screaming Brando helped to redefine the image of American masculinity with one word—“STELLA!” ~~ Focus Features
========================================================
After our homage to Kazan, Brando and the impact of censorship, we're gonna just get to it.  I'm a bit rushed so here are the pertinent questions of the day.

WRITING: What are 10 things Sunset Boulevard can teach you about screenwriting?

FINANCING: What are the 7 basic film financing sources you should always aim for (besides crowdfunding)?

DIRECTING: What advice would a master like Sam Peckinpah offer?

SHOOTING: Why you must have 4k and raw and why you absolutely don't need it?

LIGHTING: How do you shoot in black and white?

SOUND: How do you put the audience in the scene?

STUNTS & FX: What are 3 tips to stuntwork?

EDITING: Want an alternative to the 3 major NLEs?

MARKETING: What is a marketing hook?

DISTRIBUTING: What are 5 tips for self-distributing your film?

LEGAL: How should you submit a spec script for an existing TV series?