Showing posts with the label Pull My Daisy
Show all 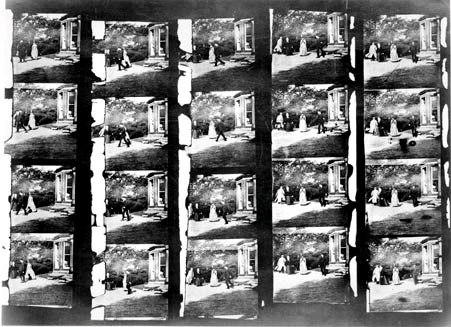 1930 National Science Museum copy of 20 frames from the Roundhay Garden Scene  October 14 The world's oldest surviving film was shot today in 1888 ; the year Jack the Ripper went on a killing spree, Vincent Van Gogh cut off his ear, Susan B. Anthony organized a Congress for Women's Rights and director F.W. Murnau, playwright Eugene O'Neill and poet T.S. Eliot were born. And on this day 125 years ago, Louis Le Prince filmed the first motion picture: Roundhay Garden Scene .  It was recorded at 12 frames per second and runs for 2.11 seconds. Was it meant to be a scene for a documentary, a fictional film or reality TV?  What do you think? If you're into movie firsts and vintage film like this then check out this YouTube channel: Change Before Going Productions. ++++++++++++++++++++++++++++++++++++++++++++ And now with a little history under our belt, let us proceed with the questions that will make us better filmmakers...  (FYI: There is a heavy New York
Post a Comment
Read more
More posts