Showing posts with the label fitzcarraldo
Show all 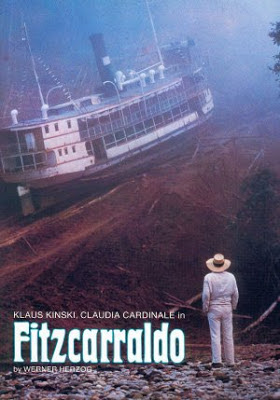 Fitzcarraldo is a 1982 film written and directed by Werner Herzog and starring Klaus Kinski as the title character. It portrays would-be rubber baron Brian Sweeney Fitzgerald, an Irishman known as Fitzcarraldo in Peru , who has to pull a steamship over a steep hill in order to access a rich rubber territory. The film is derived from the real-life story of Peruvian rubber baron Carlos Fitzcarrald . The story was inspired by the real life Peruvian rubber baron Carlos Fermín Fitzcarrald; in the 1890s, Fitzcarrald did bring a steamship across an isthmus from one river into another, but it weighed only 30 tons (rather than over 300), and was carried over in pieces to be reassembled at its destination. In his autobiographical film Portrait Werner Herzog , Herzog has stated that the film's spectacular production was partly inspired by the engineering feats of ancient standing stones . The film production was an incredible ordeal, and famously involved moving a 320-ton
Post a Comment
Read more
More posts